Jason Lariviere was born and raised in Biddeford, ME.  He was a three sport athlete playing football, basketball and baseball.  He went to the University of Southern Maine to play baseball from 1992-1995.  During his career at USM, he participated in the division III World Series, earned All-America Honors his junior and senior years and still holds many offensive records.

Jason was drafted in the 1995 Amatuer Baseball Draft by the St. Louis Cardinals.  He spent five years in the Cardinal organization spending his last year in AAA with the Memphis Redbirds.  During his professional career, Jason was named to the 1998 AA All-Star team, he recieved Memphis Redbird Defensive Player of the year in 1999 and led the Redbirds in many offensive categories.

Jason was also inducted into the Maine Hall of Fame in the summer of 2014! 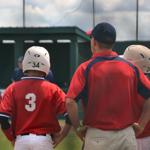 Scott is retired from the Military and handles the day to day operations of the organization.   Scott and Jason founded the SMRR in 2013 with a vision to teach accountability and responsibility to  players who play the game.   Life has it challenges but how you battle and counter those challengers defines your character and moral values.